Holly slipped away from this Earth into the spiritual realm for the next level of adventure. We miss you, every day. 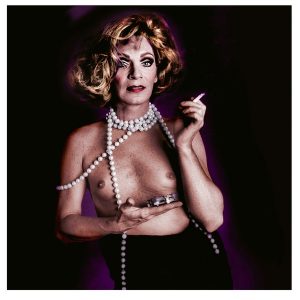 Palladino studied photography at UCLA School of the Arts and Architecture and has exhibited internationally with collected works in the Los Angeles Center for Photographic Arts, LACMA, and in the permanent collection of the Quentin Crisp Archives in NYC.

Gary Comenas is the most accurate historian of the Warhol era, and all of its associated characters and personalities. The way he describes Holly is spot-on honest. Visit his site for a trip though the mapcap, zany, creative decades. He is already known as the go-to guy by broadcast media, historians, and enthusiasts. If Gary ever decides to write a book, it will be an instant best seller. 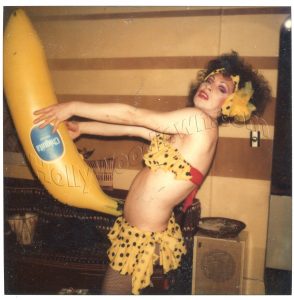 Brian and Jamie visit the gravesite of their dear friend, Holly Woodlawn, on the first anniversary of her death, at Hollywood Forever cemetery.

Holly was enjoying the Park Avenue lush life when she was fêted with this lovely 39th birthday party. The only downside was when she discovered that her name had been misspelled on the birthday cake! Video by Nelson Sullivan.

This website will soon be featuring stories of Holly, written by people who knew her best during her life and career.

Those who knew Holly have so many outrageous, madcap, pivotal, touching and significant moments hiding in the caverns of our memories. Sharing those will be a great way to honor our friend: The inimitable, original Holly.

Please send me a message to request a user name to contribute your stories here.

As an Amazon Associate I may earn a commission from qualifying purchases. Links to ebay may also result in the same.